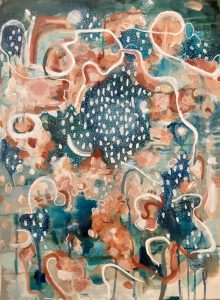 This poem was chosen for a musical response by our Featured Composer, Sherry Paige.
Music by Sherry Paige – Copyright 2019 Pigg Pen Music

When the extinction moves into town I’m heading east toward the lizards with a mimosa
in the cup holder and a loaded gun along with my library of Foxfire books a pencil guitar
iron frying pan yoga mat and shovel did you know that your refrigerator reports eating
activities and sends the shit to China where coal is soaked with fun flavors and sent
into the air in clumps not quite floating and milkweed dies out in the Midwest along
with migrating butterflies and three-headed infertile frogs and thank God for that because
my last girlfriend had six toes but it wasn’t pesticides or emasculated corn and I couldn’t
make her happy even though I watered the flowers fed the damned cat and put the seat down
and now my liver is larger than my ass the icicles on my moustache hang below my chin
the missing teeth were passed along to my daughter there are raging winds searing heat
grandmas dying on street corners children stumbling with new strains of polio goddesses
leaping through left-over forests along the pentagram paths their men whacking in the ferns
sucking on fake cigarettes searching for small expired animals under the duff and the miles
will rip under me like crepe paper flying in all directions everything in confetti scattering
flapping away pieces the walls of death moving down from the north with thin films of birds
along the edges spiked with hooves pig ears monkey grimaces root hairs spreading amoebas
across the globe breaking pipelines between everyone I know electrocutions in back rooms
hangings in bending forests until there are no branches left and the last difficult orchid
blowing itself across a global desert while rats and cockroaches hunker in the shadows
waiting for long winter’s passing the greasy black fluids of populations washing into new
oceans burning river gorges echoing last exclamations of surprise as I chew on gristle
tendons fat and bones waiting for the last wild chicken egg singing toward a dispassionate
universe a rifle in my lap and an open book.

Art: Synchronicity, acrylic paint and marker on 24×18 inch canvas, 2018
Artist Statement: I love the stream of conscious-chaos in this poem — one this painting seems to mimic.

Music: Final Road Trip
Composer Statement: My reaction to this poem was visceral, cautious, excited, uneasy – Brad Garber set up a road trip that made me take big deep breaths just walking toward his truck for the ride. The driver has issues, however honest he is about them…still…the mood is jerky, pulsing with that “anything is about to happen” atmosphere around it. I mean, some ‘extinction’ is coming and I’m about to climb into his weird truck for the final road trip of my life. Easier to have passed this poem by and said, “ too strange for me”…but way too alluring to not tackle, so…music is minor, repetitive, jerky, pulsating…wants to resolve into something beautiful but too unsure and cautious to go there.