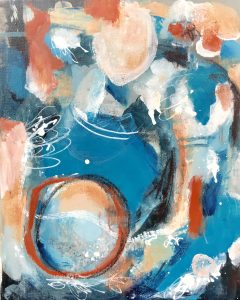 We’re going into the woods
sometime after dark / when
the grackles are asleep.

John Leonard is a writing professor and assistant editor of Twyckenham Notes, a poetry journal based out of South Bend, Indiana. He holds an M.A. in English from Indiana University. His previous works have appeared in Poetry Quarterly, Sheila-Na-Gig, Fearsome Critters: A Millennial Arts Journal, Up the Staircase Quarterly, Neologism, Anti-Heroin Chic, Burningword Literary Journal and Foliate Oak Literary Magazine. His work is forthcoming in the Rappahannock Review, Eunoia Review, PoeticDiversity, and Roanoke Review. John lives in Elkhart, Indiana with his wife, three cats, and two dogs. He can be found on Twitter @jotyleon.

Art: MFEO (made for each other) acrylic paint on 14×11 inch canvas, 2018
Artist Statement: If this poem were a colorscape, this would be it. Marked by not only cool colors, stillness, and darkness, but also by bursts of warmth — the bond between father and son, the bubbling expectancy of an unanswered question, “Do the dead dream?”