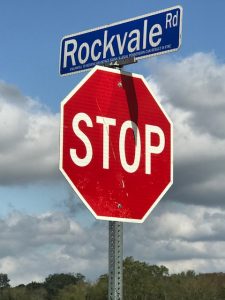 What’s in a name? Well, since you asked, we’ll tell you!

Mr. Dana Lowe, Rockvale native and historian, shares some interesting information and stories about the community. Rockvale Review thanks Dana for this glimpse into Rockvale history. For this issue, Dana talks about the “lay of the land.”

Rockvale is an area of notable ridges, rows of hills that separate waterways. Such lines of separation are often called “divides.” The two major ridges in the Rockvale area are the divide between the Harpeth and Stones Rivers, and the divide between the Cumberland and Tennessee Rivers. This latter divide traverses the crest of Versailles Knob. The waters of Harpeth and Stones Rivers are re-united where the Harpeth flows into the Cumberland, below Nashville. The waters of the Tennessee and the Cumberland come together again where the Tennessee flows into the Ohio River, at Paducah, Kentucky. This means the rain that falls on Rockvale runs off to rivers many miles away. No need to worry much about flooding – under these circumstances – but on the other hand, any dirt that moves with the water all goes away to rich bottom lands along distant creeks and rivers. Such soil erosion leaves Rockvale even rockier! Thus does the lay of the land contribute to the name of Rockvale.

Rockvale is an unincorporated community in Rutherford County, Tennessee, and has a population of around 6000 people. It’s a calm, content bump in the road with an elementary school, a middle school, and soon, a new high school. Rolling green hills and farmland, consistent with the landscape of middle Tennessee, make this community a beautiful and quiet place to live. But underneath the vale of green is a rocky structure of biological importance. Snail Shell Cave in Rockvale is a large cave that is owned and managed by the Southeastern Cave Conservancy. The cave system drains over 100 square miles of land and the water re-emerges at a major spring on the Stones River. What better metaphor can you find for a poetry journal than this? Solidity and structure that collects life-giving water, spreading it with the flow and force of a river that supplies a community with nourishment. A solid strong base. A fertile landscape. Sharp, precise structure combined with fluid, beautiful imagery. Bold language that is not afraid to be vulnerable too.