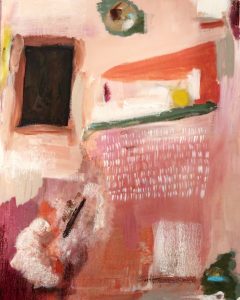 Free of French all these years
since escaping high school,
I’ve been captured by it again.
As you might guess,
there’s a woman involved.

Following her advice, I’ve
tagged everything in sight,
so it speaks its name
en français from a lolling
tongue of yellow sticky note.

It’s as if I’m in a house full
of solemn French toddlers
each intoning the one word
she knows. A pan declares
une poêle, a spatula une spatule,

a cup, une tasse, a bowl un bol,
a spoon, une cuillère, and so on,
through the morning, continuing
in the car where, on the way
to work, un autoradio plays,

and I grasp un levier de vitesse
to shift. But when I open a window,
(une fenêtre) the tiny note flies out,
disappearing in the rearview mirror
as it spirals to a distant dot.

I imagine a convict on highway
cleanup this bright morning,
daydreaming of breaking out with
the lovely French instructor who
teaches at the prison once a week.

He spears the small yellow scrap
with his nailed stick. He reads and
looks around. Could this be a secret
message? A note that whispers
of an unguarded exit?

Paul Many‘s poems and stories have appeared in such publications as JJournal, Oyez Review, The Illanot Review and others. His poetry chapbook, Thick Times, is published by Finishing Line Press. He has an MFA from Bowling Green State University.

Art: a pinball machine inside my belly, acrylic on 14×11 inch canvas
Artist Statement: Entrapment and freedom, stagnation and growth — the dichotomies and movement in this poem felt like a natural match for this busy and vivid little painting. Pink, like love, is thought to have a calming effect on the brain, but I think both the poem and the artwork suggest a certain degree of chaos amid the fluff.