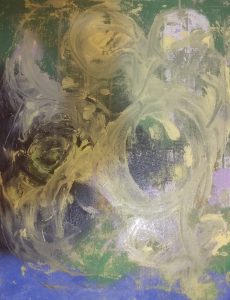 driving for dawn, a wind storm shaking
the November landscape until it throbs
for color. Our bones ache
for home. My children whisper from the back seat
have you ever seen a person die? I don’t tell them
about their father who is
right then, secretly drug-sick and huddled
against the passenger door like a child
hides from a giant. I tell them
about the Vegas airport when I was young—the oldest
of them a fresh verve in my belly. A man
stopped by a vacant desk
to have a heart attack. We watched his tanned vacation face
spoiling yellow with death
until the medics arrived. An empty
sick biting at our hulls while blue-shirts, red-faced,
crouched, attempting to bellow a soul
back into the coals
of his inner self, panting to see a vermillion
glow, a white-hot moment, erupt and throw
flames back into his eyes.

Kari Despain is a current MFA candidate at the University of Kansas. She loves writing about the locations she grew out of: the wilds of the southwestern United States, the jungles of Trinidad, and the south-central heartland. Kari was named a 2016 AWP Intro Journals Project winner in poetry, and her work has been featured in Hayden’s Ferry Review, The Windhover, Penwood Review, and Great Plains Review among others.