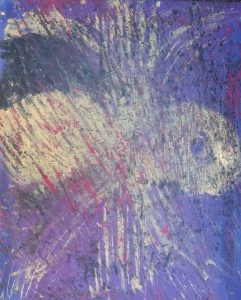 Caleb, a boy of ten or so,
comes to the phone
and breathlessly asks the on-air scientists
what would happen if a pair of black holes
got too close to each other. I turn the volume
up. I want to know too.

They don’t tell him
that it would be nothingness
swallowing
nothingness
like two cavernous souls or
desolate, hungry mouths
yawning for more empty

that they would never be happy

or that there would be nothing to take
and therefore nothing
to produce or expel but more
nothingness.

They do tell him they’ve
detected such an event
but their jargon is so quietly trusting
in the hope that Caleb will
begin to know how the universe
does
and doesn’t work
that both of us have already forgotten
what they said.

Amber Thompson is an emerging writer whose work has most recently appeared in the literary journal Westview and online at The Poet’s Billow. During her time in college, the native Oklahoman’s writing transitioned from the world of journalism to that of poetry and narrative nonfiction. Thompson can be found at www.beautifuldayforvintage.com and on Twitter @MsThompiochi.