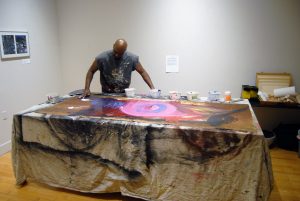 After receiving the submitted poetry, I read each poem silently to capture the rhythm of the work. Each poet was a new voice for me. I couldn’t hear them, so I recited their poems aloud. Some flowed like music and produced images and colors instantly. Others took time. I replayed the poems until more images appeared in my head. It was like looking at currents in a stream. Ideas flowed from a verse or a stanza which seemed to be a hub to the entire poem. Each had its own special way of speaking to me. Standing in front of white canvas and surrounded by numerous colors, I reached out to paint. Using my hands as extensions to their letters, I embraced the poets’ words. Most of the paintings started as flowing spirals and then took directions. I aimed to create multiple layers of shapes and colors to a surface of the emotions and thoughts which touched me. These connections helped to transport me to another dimension — a virtual realm where the wordsmiths’ expressions help to orchestrate a gathering of clustered colors and patterns. Each painting reflects my manifested visual voice of their shared worlds. 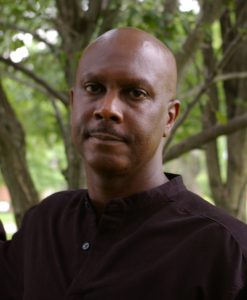 Henry L. Jones is an award-winning writer (ie, poet and playwright) and artist who focuses on cultural connections and social issues in both his art and writing. He’s inspired by his African heritage, culture and history to delve into old roots. He creates art with a technique he coined as “Gibbing,” which involves painting with his hands instead of brushes. Jones’ Gib Art has been exhibited widely in many museums, universities, and galleries in the United States and also in Tokyo, Japan. His art is in private and public collections. Some art and writing awards include: Selected Visual Artist, Nashville Symphony Orchestra’s National Endowment for the Arts Program; Semi-Finalist, Tennessee Performing Arts Center, Fest de Ville Nashville; Visiting Artist, University of Illinois; Artist-in-Residence, Zaire Unlimited Cultural Center; Featured Solo Art Exhibit for Nashville Harlem Renaissance Tour (Sponsors: Blackside, Inc., Cheekwood Museum, N4Art); Peoples Choice Award, Centennial Art Center; GANSPA Award (National and State); Top Picks, Nashville Scene; Top Picks, City Search; Southern Artistry Nominated Artist; 8 Days Top Picks, Nashville Scene; Noted Books to Buy, The Tennessee Tribune; Juried exhibit inclusions and other awards. Over 40 publications have published his poetry in anthologies, journals, magazines, and newspapers. He’s the author of Run into Blackness: Feeling My Poetic Gumbo. He recites often as a Featured Poet at numerous cultural events and poetry venues. Currently, he an Art Wire Fellow for The Porch Literary Collective and the OZ Arts Center, creating art for several exhibitions, working on his next poetry book and his play production, Another Day, Another Dollar.  Jones is a graduate of Fisk University. He’s a native from Detroit, MI and transplant from Chicago, IL and lives in Nashville, Tennessee with his wife and children.