When I wake from the dream of sleeping
with Death, her breathing speeds. I rise
and sit by her side; she’s at 20 breaths

per minute now. There’s nothing left
to do. I’ve written down one more Kahlil
Gibran quote, Sadness is a wall between

two gardens, one of those We think you’ll
like this emails, 6:25 a.m., from Pinterest.
I’ve watched the slideshow looping in its

frame on her bedside table by the silver bell
she’d ring when she needed us: Here she stands
graduation day with her father, here, six years old

reaching her arm into a silver pot, here at two
in her toddler’s daffodil dress. 6:51, I write
21 breaths per minute, paint a tree’s trunk

on the Buddha Board with parallel branches,
give up on the leaves. Paint, then dislike,
one childish heart that floats then fades beside 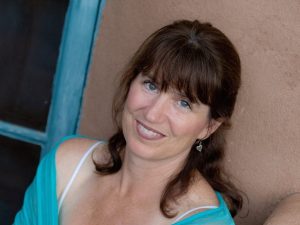 Tania Pryputniewicz, a graduate of the Iowa Writers’ Workshop, is the author of November Butterfly (Saddle Road Press, 2014). Recent poems appeared in the anthology America, We Call Your Name: Poems of Resistance and Resilience and NILVX: A Book of Magic (Tarot Series). In Denmark this past March, Tania presented her poems and poetry movies at Odense Lyrik 2018. She teaches poetry at San Diego Writers, Ink and lives in Coronado, California with her husband, three children, one blue-eyed Husky and Luna the formerly feral cat.

A Note From the Director:

The first time I read Tania Pryputniewicz’s poem, “Two Gardens,” I knew I’d read it again and again. The poem seems straightforward, its language, matter-of-fact, its treatment of the theme of time, obvious. After all, there are four instances where the time on the clock is given. But I’d argue the approachability of this poem is deceiving. This poem leads the reader to an ending that causes the throat to tighten and the heart to thud.

It’s not like the poem doesn’t try to warn us. We know something terrible is coming from the first sentence, because “Death” (capital D) appears in the speaker’s dream. Though the speaker seems to accept the inevitable with a sort of resigned maturity, the reader is afforded no such luxury. I found myself dreading the last stanza. I knew what was coming and I wasn’t ready for it, despite the deep unwinding of mercies the speaker gives us, the tender disclosure of a sorrow long-held and slowly released. Those things cannot be described, they can only be revealed, and that, I think, is this poem’s power. It doesn’t try to prove itself because the poem knows, Pryputniewicz knows, there is no image or craft element that can capture grief in its fullness. So, poem and poet rely on the ordinary: the email from Pinterest, the Gibran quote, the flash of remembrances in the digital picture frame, the silver bell, the Buddha board and the drawing of a tree. Ordinary things. Ordinary language. Restraint before the rush of darkness that the poem doesn’t allow us to see, but which we nonetheless feel.

There is a subtle back and forth motion in the poem that lies beneath the surface. It’s the kind of thing a reader can sense before it’s named. The forward movement of time and the literal notation of it on the clock, the speeding of breathing – these things pull against an opposite force, the slow fade of the body, the looping slideshow of pictures spiraling down from age 18, to 6, to 2, until finally that bitter zero which means a body is no longer a part of the living. Pryputniewicz navigates this journey skillfully. Instead of intense language, she “paint(s) a tree’s trunk//on the Buddha Board with parallel branches,” but “gives up on the leaves” – that specific proof of life. She gives us “one childish heart that floats and fades beside//the tree.” – an image so simple and yet, representative of human emotion, human grief, multi-layered and complicated. Instead of overt sorrow, she quotes Gibran: “Sadness is a wall between//two gardens.” One garden is life, one is death, and the wall is that which must be climbed, which is being climbed in every line.

When I finally read the cover letter to this submission (after it was chosen as the winner), what I had suspected (that the poem outlined the death of the poet’s mother) was proven true. But another part of the letter surprised me. Pryputniewicz had been awarded a partial scholarship to a Sustainable Arts retreat in Tennessee but had declined it in order to care for her mother. Perhaps in some way, her mother is giving her another opportunity for a Tennessee retreat. As the winner of our poetry contest, Rockvale Writers’ Colony is delighted to be able to invite this poet to our state for a weeklong residency. It seems fitting, almost designed.

One last thing – the day I talked to Tania Pryputniewicz on the phone to let her know she won our contest, to invite her to Tennessee for a personal writing retreat, was May 13th. It was the day after Mother’s Day.