When Sandy asked me to write music to poetry, I thought that would be easy enough. After all, I’ve played while poets spoke on many occasions. But I found that this was quite a bit different. Playing live, I often could not hear everything the poet was saying and I found myself focusing on creating an ambiance for the room rather than a reflection of the poem. For this, I wanted to create music to the poem. Not treating the poems as lyrics, but as words that guide the music. I read each poem several times through. Every single one took me to a unique place. The task of choosing just a few was pretty difficult. I went with the ones that I had some personal connection with and/or I heard specific melodies as I read them. 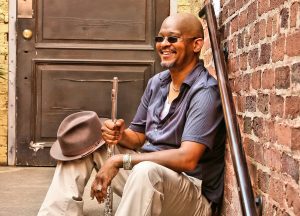 Michael Morton began his studies with jazz at Berklee College of Music with Peter Gordon and Matt Marvuglio. He then decided to focus on classical studies, transferring to the University of Memphis, where he studied with Bruce Erskine. After 3 1/2 years, he transferred to Chapman University, studying with Arthur Hoberman and received his Bachelor of Music degree in Flute Performance. He was awarded a fellowship to study at the Thornton School of Music at the University of Southern California where he earned a master’s degree in flute performance with Jim Walker. Michael is a former principal flutist with the Southeast Symphony of Los Angeles and a member of various chamber groups. He can be heard on movie soundtracks and has performed with or for The Los Angeles Opera, Placido Domingo, Whitney Houston, Terrance Blanchard, Rihanna, Terrance Howard, and Spike Lee. He currently resides in Nashville, where he is a freelance flutist and plays with the Nashville Jazz Workshop Quartet. He has recorded 7 albums, some of which can be found on Amazon, Spotify and other streaming services.