To my mind, poets are the keenest observers of the human condition. They show us how to look, how to see both inwardly and outwardly and in doing so, teach us how to be nearer to ourselves and the natural world. They distill mysteries into something familiar. They are alchemists, tumblers, divining rods of discovery. They rub words together until a hidden truth finds its way into the open. A shard that no longer cuts, but is smoothed and polished until transformed into a poem. The verse itself is a rare pebble of salt-washed glass waiting on the shore for a reader’s hand to hold to the light and illuminate everything.

As a beachcomber, my eye is trained to ‘read’ shorelines, to consider what might be found in the flotsam and jetsam at wrack lines, to pay attention to tides, to know where to look after a storm. I applied this process of ‘reading’ to selected poems, and took them with me to a secret nook of Pacific shoreline near my home. Here, I read and re-read them over a number of days, listening and looking, jotting down notes on images, impressions, sounds, and textures as each ‘new shore’ revealed itself, line-by-line. My notes are a scattershot of connections to my life spent on the strand. Some images came quickly; others, took some time to surface from the deep.

For me, photography is another form of storytelling and I have been photographing combs and discoveries from around the world for nearly a decade. Each photograph serves as a visual diary of my scavenge and helps me pay attention to the light and texture of a day. I have an extensive body of work, so in an attempt to keep the process uncomplicated and to mimic combing a solitary stretch of beach, I selected 100 photographs to serve as a compilation of assorted finds from recent combs. As I reread each poem, I sifted through the collection until a natural pairing was found. Each pairing creates a diptych, a union of image and words, pixel and print, and thus an extension of both to create a new consideration of each. 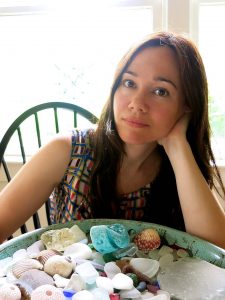 Shelley Thomas is an award-winning teacher, writer, and artist. She has received international recognition for her contribution to ideas in education, and has worked with Greenpeace, the UN, and with schools throughout Europe, South and North America.

A professional artist and writer, her recent publications include animated illustrations and original art for Sarah McLachlan’s performance of “World on Fire” (2017 JUNO Awards), “Beautiful Girl” (2014 JUNO Awards) and essays “The Edible Student: Why We Eat Our Young in the Consumer Age” and “Lost Amid A Million Voices, Decoding and Mastering Multiple Literacies” (Dialogue).

A lifelong beachcomber, Thomas has a deep love and affinity for the ocean, its creatures, and their preservation. She actively combs the shores of the Great Lakes, the North Sea, Atlantic and Pacific Oceans where she scours tidelines for artifacts, fossils, flotsam, marine flora and fauna to photograph and research. Currently, she is completing work on a beachcombing memoir that covers a sabbatical year of treasure hunting on fabled shorelines around the world.

Thomas is a graduate of McGill University (MA), the University of Western Ontario (BA), and the University of Toronto (B.Ed). She is a native of Ontario, Canada where she served as Head of English at Ridley College before relocating to San Rafael, California where she lives with her surfer husband. Her favourite time to comb is just before sunrise, with the promise of a freshly laid beach, and a tide that begins to recede. Follow along at washed_up_artist on Instagram and Washed Up on Facebook.