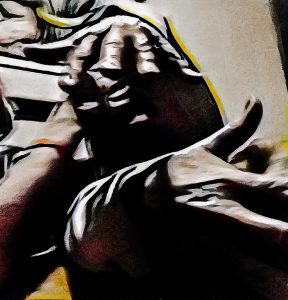 —For his nurses on the ICU

At sixty he’s an old coot, my younger brother.
That holey wool sweater is the one he wore
in Nepal smoking ganja with holy men in caves.

The zipper on his leather jacket has been broken
for three years. The battered fedora and the clear
blue eyes are both inherited from his dad—

his dad who hated that scruffy ponytail,
who would be so happy to know his son didn’t
end up drunk in the gutter like Uncle Orville.

See him one year out of the ICU: He rolls his own smokes
—The only vice I’ve got left, Sis—taps out a line of tobacco,
licks the paper, twists it up in one practiced motion

then pinches off each ragged end, hands no longer shaking
now that he’s sober for the sake of his liver:
You’ve only got two of those, you know. Har!

Listen to him in his taxi as he speaks Spanish
with one fare and Portuguese with the next,
recommends movies, critiques the Iraq war,

hands out voter registration forms to riders
and veggie burgers to people on the street.
I try to do my bit, he says. You might hear

about his two fine boys. Probably not about
the marriage that didn’t work. Nor the education he made
for himself, roaming with his satchel and camera

through Mexico and Thailand and Morocco
and Peru on the proceeds of taxi driving
and his little pot farm on the slope of Mt Hood.

Nor how for a long minute he owned a bar
in Copacabana, nor about the boy— his Brazilian
girlfriend’s boy, balded by chemo—

how he called him his little Buddha, how
he scoured Rio in his old fedora to find
a Tibetan monk to chant for the child’s funeral.

But watch him light up now—with us again after thirty hazy
years because you tended him, turned him, kept him breathing,
pulled him through detox, didn’t give up on a drunk.

Mary Kay Schoen has written feature articles on health and education for the Washington Post and numerous association publications, She’s recently returned to her first love—poetry. Her verse has appeared in Persimmon Tree, America Magazine (Foley Poetry Contest runner-up), New Verse News, and Weaving the Terrain (Dos Gatos Press), an anthology of Southwestern poetry. She lives in Alexandria, VA, with her husband and lots of nearby children and grandchildren.

Photographer’s Note: I find this poem to be plain spoken and not overly emotional considering the subject. I choose this photo, somewhat obscure hands, because I felt it matches the poems tone — deep emotion and yet somehow holding back.