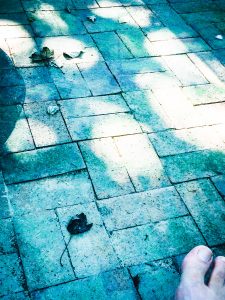 That night, back home, as you sat
barefoot on your front porch swing,

the one he had made from the lightning tree,
and you wrote to him of the long parade,

of how you had been horse-drawn
down Main Street to the river,

town turned out as if to see a hero returned,
you could not have known about the boys who stood watch

in the rain so he could dream-chase you
from the deepest part of a muddy foxhole,

or how he woke to find two spread throats,
as the flash bulbs popped back home, and the pin-striped mayor

spoke of the future, and there were cheers,
and you, with your dimpled cheeks, waved,

and the band played stars and stripes,
and the sky burst blue and white and red.

While Lafayette Wattles doesn’t write nearly as often as he’d like, he is fortunate enough to have the support of family and friends in his creative pursuits and truly loves the time he spends at the page. Lafayette has received an MFA from Spalding University, a grant from the New York State Arts Council as well as a Ucross Foundation Fellowship. A three-time nominee for the Pushcart Prize, twice nominated to Best New Poets, and twice named to the Best of the Net Anthology for poetry, Lafayette has published over 130 poems in print and online journals.

Photographer’s Note: This poem made me think of bare feet and toes.