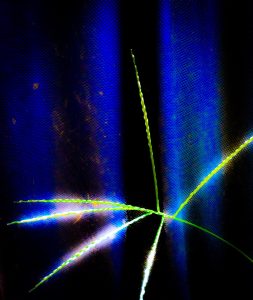 That which makes you lie down in green clover,
urge light as breath against your breastbone.

Or the green itself will pull you down
into shade pooling like a body of water.

A tangling will ribbon its way to your knees
till supplicant then prostrate you give way,
an echo of the child again
pressed to the planet’s pulse the way you lay
before you ever knew a prayer by heart
but only hummed a version
of the humming all around you.

Listen where you loll, and be.
That’s praise you feel, that surge of comfort
where your head rests in the plush,
your thrumming feet and body languid in repose
while all around you dances, nothing ever still,
the scent of tender green in praise of you
for knowing how to notice, for minding
with your fingertips the rounded, fragile petals.

The craving soil itself is rapt with quivering,
filled up with that which makes you lie down among,
lie down within, against, toward,
that rousing quiet held which holds you here,
the shape your body makes, the remedy and jolt,
the ways to answer that which made you
to lie down in your whole singing flesh.

That which made you
made you to lie down in green clover.

Photographers’ Note: I love the opening and closing lines. The green clover. 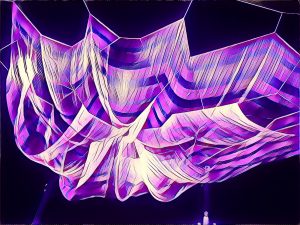 Stand at the canyon at sunrise
to watch the last dark become shadow,
to watch the shadows of morning drain like water.
The walls fill downward with light
you would never have believed before now.
Faith would never, not for an eternity, have been enough.
You have to witness for yourself.
The birdsong lifts the sky into being,
beaks and tongues and heat blooming into day,
as if the sun comes out of the ruby nests of their throats,
as if they sing the scent of juniper and pinyon,
as if they sing you, here.
You should believe enough now
to throw yourself from the rim.
Walk to the edge, as if you could walk
across the praise of day, as if you could fly.
But it is enough to practice throwing your voice
like a naked body, the one you were born into,
off the red lip of the canyon.
It is enough to whisper,
until you learn well enough
that there is nothing you need to say.

Photographer’s Note: Although I can’t explain it, this poem made me think of this photo.