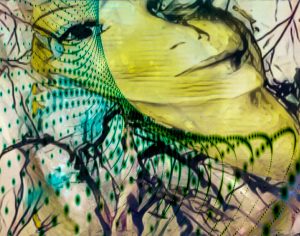 My Daughter Buds at Eight & I Buy Her a Bra

My daughter brings me a stone from her dreams
& asks which star it fell from.

She places it among those things that will leave
her some day & she goes on gathering.

This is one of those moments that suddenly turns
toward you, opening as it turns,

as if for an instant she paused on the edge
of a heartbeat, then pressed

forward, conscious of the fear running beside me.
I keep my feet within the lake,

a woman removing her shoes to cross herself
as water. How lovely it is to long

alive in my mouth, my hands on fire as I touch
her fingertips on this long resilient morning. 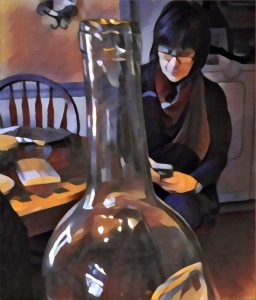 The day he was born there wasn’t a moon shining outside.
I lay & watched the day fade to blue darkness,

wondering why the sea never tired
of tides turning. Still, we lived, grew together,

He comes to me & I fold my wings backwards,
whoosh at the speed of light—

out of breath or out of thought—
still & suspended in the sky. The synchronistic happenings

of the weeping Madonna seeping
out from my feet fall into my imagination,

filling my chest with rawness.
Even the greatest moments, calmest action,

most peaceful energy were unable
to ground it once it struck.

This type of hug winds you up for everything.
It becomes geometry or some function

of pi the Egyptians haven’t built—
a wonder to decipher yet.

Photographer’s Note: This photo makes me think of a mother waiting. Waiting for the call from her son, for the hug.

Ariana D. Den Bleyker is a Pittsburgh native currently residing in New York’s Hudson Valley where she is a wife and mother of two. When she’s not writing, she’s spending time with her family and every once in a while sleeps. She is the author of three collections, fifteen chapbooks, a novelette, an experimental memoir, and two crime novellas. She hopes you’ll fall in love with her words.