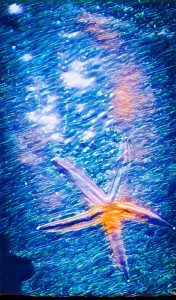 On Sundays we used to perch on his armchair
and watch him play chess against his friend.
The men pored over the positions
as blue smoke from their pipes
curled above the pieces.

Our dad played hide and seek with us,
mowed his signature into the soft lawn
of our childhood and smoothed
a path to the hillside lookout,
where I negotiated win-wins with the future.

I skimmed dead jacaranda bells
off the pool as more fell
and then scaled the tree
to flimsier branches
above the sob-and-hug on the terrace.

Words drifted up and pierced me –
talk of a runaway truck
careening into a green sedan
driven by a dad
replaced by a void.

Photographer’s Note: So many wonderful lines in this poem. And the under the radar emotional ride is powerful. The photo I selected simply made me think of heaven. 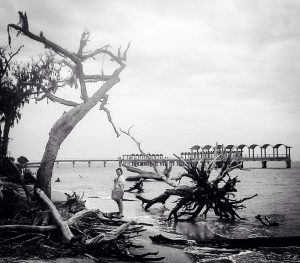 Dear Ray, I got to work all jagged. Needing to feel better,
I played the message from Josh in Berlin and it cheered me up.
In class, my students hammed it up – swapped critical thinking
theory for drama. Give us conflict, I said, yearning also.

At home I took a beer from the fridge.
Don’t get mad, Ray – there’s no hard liquor in my home
and my shoes tap out the daily work ethic.
I prepared beef lasagne and salad for my lover and her children.

Fetching herbs from the garden, two creatures waylaid me –
a spider in silk and a bee pinioned in the web, one wing flapping
but futile. I laid aside the herbs and helped the stuck creature.
It floated away, punch drunk, not looking back.

This scene put me in mind of your character who talked
to his neighbour over the picket fence in the heart
of night. Snails were the topic of conversation I think.
I checked my greens for bugs and grit.

Little voices and keys sounded at the front door.
We sat down to eat as a family. Ray, do you know
I’ve outlived your 50 years by a week? I nurse this miracle
and think of you, me, reviving in our fifth decade.

Hey, Raymond, how about we hook up some time?
Not in a bar – how about the good old laundrette cafe?
Maybe your Tess and my Zoey can join us
and the whirring dryers, sleeves inside waving frantically.

Photographer’s Note: What a loss the death of Raymond Carver was. This poem captures the sad conversational tone of a Carver story. I thought this photo could be part of a Carver story too.

James Gering has been a short story writer and poet for many years. His poetry and fiction have garnered some awards and have appeared in a number of journals including Rattle, Every Writer, The Lake, and Cordite. He holds a Masters with honors in Creative Writing. A sample of his work can be experienced at jamesgering.com. When not writing, he teaches English at the University of Sydney in Australia. Away from work, he revels in nature – climbing, canyoning and running trails in the pristine Blue Mountains. His first full collection of poetry is sitting on the blocks, rearing to go, but James fears the depth of silence likely to greet its arrival, so he tinkers with it, submits individual poems and celebrates when progressive journals like Rockvale Review accept his work.