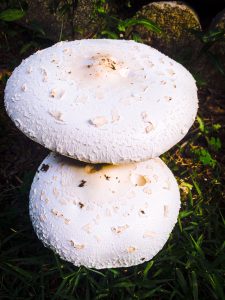 Be something rare and elusive.
Make your home in the shade of trees,
in the perfume of orchards.
In the meadows where clover and larkspur
wage their beauty wars, be nourishing.
When the forest fires are three seasons gone,
be the comfort in the absence.
When others discover your delicacy,
surprise them with savor.

Photographer’s Note: It has been a rainy summer. And the mushrooms appear and disappear overnight. 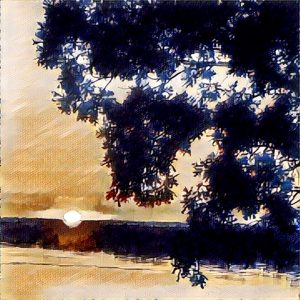 Your first time here,
the park-like setting surprises you,
in this place that is not a park
despite its lush lawns, its blushing crepe myrtles.
The visitors’ area looks like it could be a bandstand,
a gazebo, a picnic shelter, but it is none of those things.
Mere steps from the razor-wire fence,
its main purpose is to house a telephone
and a built-in wooden box that, in another life,
would be used to store gardening tools.
Here, it is filled with forms and pens.
You pick up the heavy, old-fashioned receiver,
tell the barking voice on the other end
who you are and who you’ve come to see.
You fill out the forms. The people around you do likewise.
You settle down on benches to wait, fanning yourselves
with the freshly-inked pages, resting bags of quarters
(the only thing you’re allowed to bring)
against your knees. You read the signs posted:
No tank tops or sleeveless shirts. No khakis.
No shorts. Definitely not a picnic,
but a partaking of sorts, a fellowship,
united by your efforts at brave faces.
You’ve come so far, from Fort Meyers,
from Knoxville, from Dover.
Children are taken out onto the lawn to play.
They keep to the shade of a sycamore,
but even that cannot prevent their scrubbed faces
and carefully combed hair from wilting in the summer heat.
You wonder if they know that nothing here can be
merely what it is. A sycamore is a shadow.
A crepe myrtle is a pretty distraction.
The visitors’ center says unwelcome.
A man, a dad, a son, a husband, a brother, is an inmate.
A woman in a Sunday hat opens a King James’ Bible,
big and gaudy as a treasure chest,
all tooled leather and gold embellishments.
They won’t let her take it in, but perhaps it’s not
for whomever she’s come to visit. It’s for us.
She reads aloud from the Psalms in a voice
that was made to be the call
in call-and-response,
carrying an unbroken plea skyward.

Photographer’s Note: What a beautiful poem. I don’t think a photo can match the power of this poem.

Lauren Scharhag is an award-winning writer of fiction and poetry. She is the author of Under Julia, The Ice Dragon, The Winter Prince, West Side Girl & Other Poems, and the co-author of The Order of the Four Sons series. Her poems and short stories have appeared in over sixty magazines and anthologies. She lives on Florida’s Emerald Coast. To learn more about her work, visit: www.laurenscharhag.blogspot.com