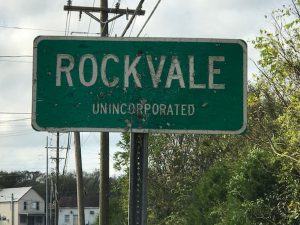 What’s in a name? Well, since you asked we’ll tell you!

Mr. Dana Lowe, Rockvale native and historian, tells some interesting and often humorous stories about the community. We will share a tidbit of Rockvale trivia in each issue. Issue Three’s featured fact is about a principal of Rockvale School, Mr. William Eris Read.

Dana shares this short anecdote: From the early 1950s to the early 1970s, the Principal of Rockvale School – grades 1 through 12 – was Mr. William Eris Read. A local fellow made good, Mr. Read was himself an alum of the school he administered. On his desk was a neat little nameplate with chrome letters saying simply W. E. READ . As a kid, I thought, “How appropriate. At our school, the  principal’s name says, ‘We Read!’ ” Rockvale has always been kinda literate, like that.

Rockvale is an unincorporated community in Rutherford County, Tennessee, and has a population of around 6000 people. Rolling green hills and farmland, consistent with the landscape of middle Tennessee, make this community a beautiful and quiet place to live. But underneath the vale of green is a rocky structure of biological importance. Snail Shell Cave in Rockvale is a large cave that is owned and managed by the Southeastern Cave Conservancy. The cave system drains over 100 square miles of land and the water re-emerges at a major spring on the Stones River. What better metaphor can you find for a poetry journal than this? Solidity and structure that collects life-giving water, spreading it with the flow and force of a river as it supplies a community with nourishment. A solid strong base. A fertile landscape. Sharp, precise structure combined with fluid, beautiful imagery. Bold language that is not afraid to be vulnerable too.